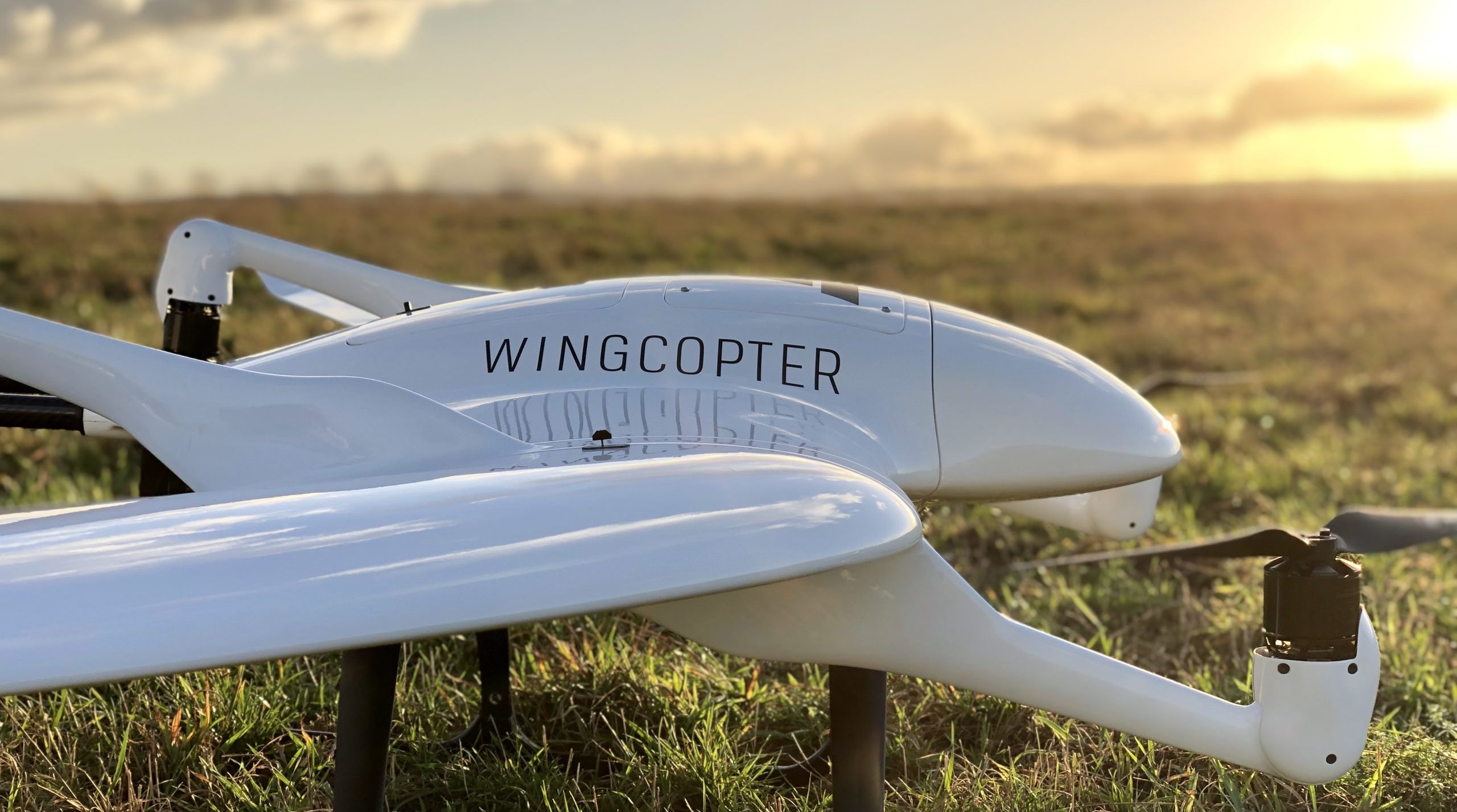 Darmstadt, December 13, 2019 – The German drone start-up Wingcopter has secured a seven-digit Euro financing. The investment was arranged by Singapore-based Corecam Capital Partners. Wingcopter develops and produces autonomously flying delivery drones for social and civilian applications - true to the company’s guiding principle "Technology with a Purpose". With its patented tilt-rotor mechanism the startup closes the gap between commercial drones, helicopters and fixed- wing aircraft, thus achieving a new dimension of efficiency.

With the funds raised, the 35-member team headed by the three founders Tom Plümmer (CEO), Jonathan Hesselbarth (CTO) and Ansgar Kadura (COO) intends to bring in further specialists, speed up the development of the next Wingcopter generation and expand its global maintenance and sales network. Already today Wingcopter serves various clients in 10 countries.

Martin Lechner, Managing Partner of Corecam Capital Partners, is convinced: "The investment in Wingcopter is the ideal addition to our existing portfolio in the fast-growing drone technology market. Their unique tilt-rotor mechanism as well as the strong global patent protection and the interest of blue-chip customers were decisive for us".

With its offering of efficient eVTOL drones, Wingcopter meets a rapidly growing global demand. Thanks to the fusion of two drone types in one through the tilt-rotor, Wingcopter drones, just like multicopters, can take off and land vertically in the smallest of spaces. As soon as the Wingcopter has reached its desired flight altitude, all four rotors swivel by 90 degrees and turn the drone into an unmanned airplane in a matter of seconds. This smooth transition enables ranges of up to 75 miles/120 kilometers in one flight and a Guinness world record speed of 150 miles/240 kilometers per hour. Even in strong winds of up to 55 mph/90 km/h or bad weather condition, the Wingcopter flies autonomously and reliably. The long-range drone can thus be ideally used for life-saving deliveries of medical products such as medicines, vaccines, blood or lab samples as well as for the delivery of parcels (e-commerce/postal service) or food.

"We are pleased to have won Corecam as a renowned investor with extensive experience in the drones sector. The financing will help to significantly speed up our growth, meet the already high domestic and international demand and focus on the most promising markets with regards to global expansion. Our vision is to sustainably improve the lives of people around the world with our technology," commented CEO Tom Plümmer on the financing round.

Wingcopter has already successfully carried out various projects in which medical supplies were delivered over long distances to remote regions, including a six-month pilot project with DHL and the German development agency giz in Tanzania and a project on the South Sea island of Vanuatu, where Wingcopter, on behalf of the local Ministry of Health and supported by UNICEF, successfully tested the supply of vaccines for children over several months. In both tests, the Wingcopter reduced the patients' waiting time from several hours or even days to a few minutes. Wingcopter can thus significantly improve health care in many places.

In Ireland, Wingcopter, in partnership with Vodafone and local customer SIS, recently delivered insulin beyond visual line of sight (BVLOS) for the first time in Europe and over a distance of 14 miles/21 kilometers despite harsh wind conditions. Further successful projects have been carried out in Japan, England, Malawi, Ethiopia, Norway, Canada and the Arctic, where the drone's performance has been demonstrated under extreme conditions (- 44 °F/- 42 °C).

Wingcopter is currently planning to test a new delivery application in the USA together with a tier-one partner, leading to further disruption of the logistics’ status quo. Furthermore, the company is already in talks with selected investors about the next financing round.

Wingcopter is an award-winning German manufacturer of unmanned eVTOL aircrafts dedicated to improving the lives of people worldwide through meaningful commercial and humanitarian applications. The Germany-based start-up focuses on the delivery of medical goods as well as parcels and food.

With its unique, patented tilt-rotor mechanism, Wingcopter by far exceeds the range and payload capabilities of commercial multicopter drones, achieving a new dimension of efficiency. The electrically powered Wingcopter aircrafts take off and land vertically like multicopters in the smallest of spaces and fly long distances as efficiently and quickly as fixed-wing aircraft. This enables ranges of up to 75 miles (120 kilometers) and a Guinness world record speed of 150 mph (240 km/h). Even in strong winds of up to 44 mph (70 km/h) or inclement weather, the Wingcopter flies autonomously and reliably.

Wingcopter is a winner of the German Aviation Innovation Award (IDL), winner of the Digital Logistics Award, the record holder of the "DroneMasters" drone marathon as well as SDG's Spotlight Winner of the Japanese NTT Open Innovation Challenge 2019. In 2019, co-founder and CEO Tom Plümmer was added to the Forbes 30 Under 30 list.

Corecam Capital Partners specializes in direct investments within the Corecam Investment Group. Corecam is an independent and owner-managed family office for global entrepreneurs and their families. Founded in 2009, the company manages assets of approximately USD 2.5 billion and employs around 50 people in Singapore and Zurich. Corecam Capital Partners offers its investors access to global real estate, venture capital and private equity investments.