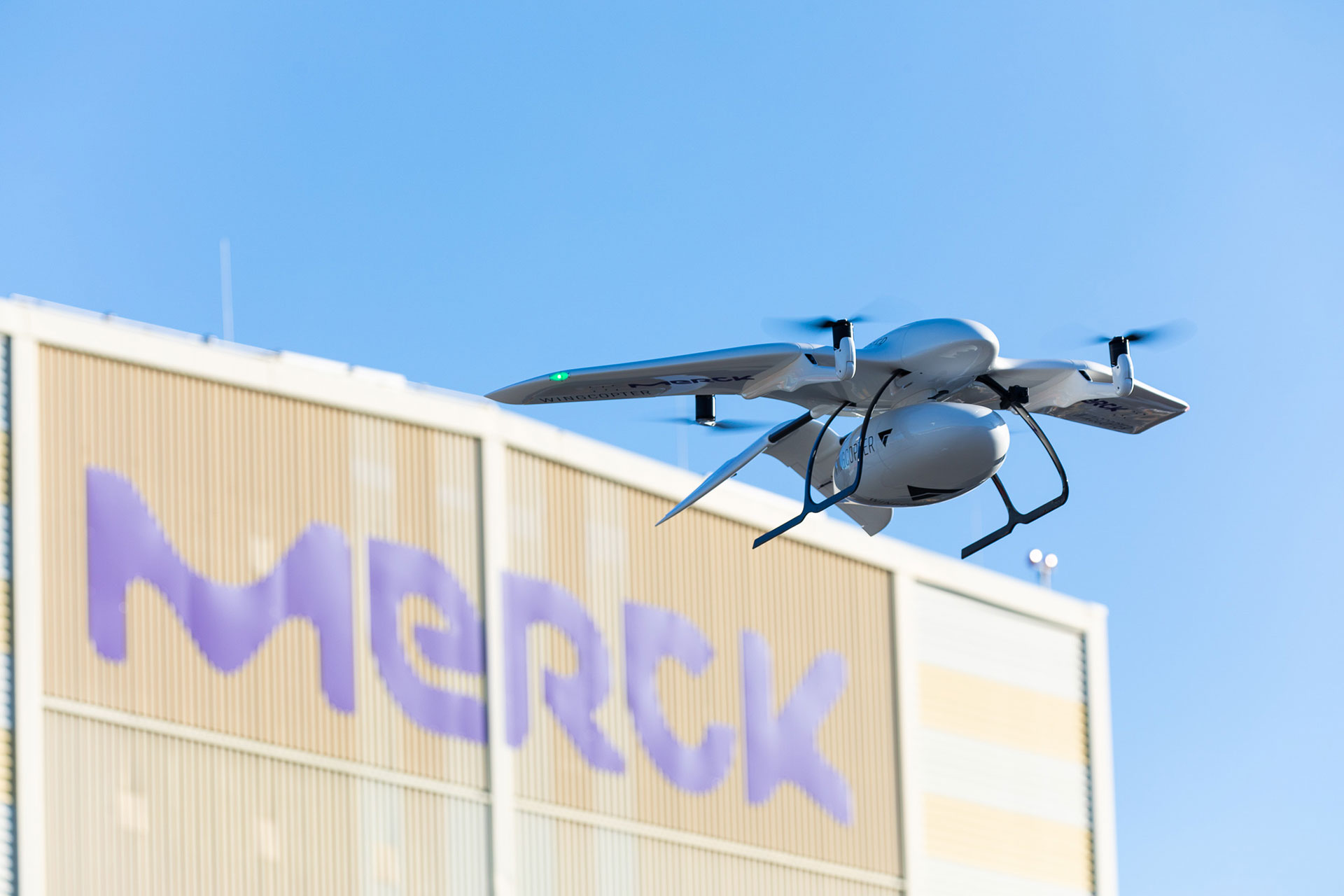 Drones instead of trucks: Successful global premiere in inter-site logistics

The German Federal Ministry of Transport and Digital Infrastructure is backing a practice-based project by Frankfurt University of Applied Sciences, Merck and Wingcopter

Frankfurt am Main, 05 February, 2020 – Frankfurt University of Applied Sciences (Frankfurt UAS), Merck and drone manufacturer Wingcopter are designing and testing the use of delivery drones for inter-site logistics operations at Merck. The project, which is the first of its kind in Germany, involves transporting pigment samples by special drone from the Merck site in Gernsheim to a laboratory at Merck headquarters in Darmstadt some 25 kilometers away where they must undergo quality assurance testing for an ongoing production process. A van that travels to and from both sites twice every working day usually handles the transport. The first official flight by drone took place this noon.

The main objective of the project, known as "ProGeDa: Gernsheim–Darmstadt Sample Shipment," is to evaluate this shipment solution for inter-site use and develop it into a long-term business model, based on factors such as time savings, sustainability, cost, and flexibility. The Research Lab for Urban Transport (ReLUT) headed by Professor Dr. Kai-Oliver Schocke at Frankfurt UAS is in charge of project management and assessment and is evaluating it with support from Keimer Aviation. The activities of ReLUT center on the development of economic and ecological solutions for delivery and freight forwarding services. Besides developing the special drone, the startup Wingcopter plans and carries out flight operations and coordinates all the aviation law issues involved. Merck is steering the overall process and manufactures the goods for shipment. The German Federal Ministry of Transport and Digital Infrastructure (BMVI) is providing the current project with financial assistance of € 107,000 from the "mFUND” to support digital business ideas. Wingcopter and the Frankfurt UAS are receiving this funding. Wingcopter was selected for the project since its drones have all the qualities needed for air freight transport between two or more facilities: They can take off and land vertically on the smallest of spaces, but thanks to their swivel-rotor mechanism they can also cover longer distances much more efficiently, quickly and quietly than conventional multicopters.

A key focus of the project is to determine the best route between the two sites, taking into account a multitude of different factors such as aviation law, environmental impact, suitable takeoff and landing areas, processes on the ground, and costs. The three cooperation partners expect the drone shipment option to prove to be not only faster and more sustainable, but also less expensive and more flexible. "This project will demonstrate the sustainability of drone flights for commercial purposes in public airspace in all three dimensions of sustainable development: environmental, economic and social. We expect a high level of scalability and transferability to other industries," Professor Dr. Kai-Oliver Schocke says.

Tom Plümmer, CEO of Wingcopter adds: "We have repeatedly demonstrated that our delivery drones offer significant advantages over both conventional, ground-based shipment technologies and manned aircraft in a wide variety of cases, specifically involving life-saving deliveries to remote locations of various developing countries. Thanks to this unique project, we can demonstrate that the benefits are equally applicable to commercial deliveries in urban area of industrialized countries."

Stefan Nowak, Wingcopter project manager, points out: "We know of no other project in the world where goods are delivered over such a distance and out of sight by drone in a metropolitan region – across electricity and train routes, motorways and state roads as well as production infrastructure. With today's flight, the project marks a milestone in the history of unmanned aviation and intermodal logistics.” Moreover, the project serves as a role model for similar projects throughout the world in terms of the aviation regulatory affairs and coordination effort involved.

Jens Klatyk, Gernsheim Site Director, sees other benefits of the project: “The analytical laboratories in Gernsheim do not cover all the required parameters, which is why special laboratory tests are performed at the Darmstadt site. Using drones instead of motor vehicles to transport the samples offers the possibility to speed up delivery and avoid traffic congestion.” The associated time savings can range from one hour to one day. Drone delivery also helps to avoid empty miles and emissions.

Based on the data obtained during the delivery flights and investigation of the end-to-end processes, the project partners will present their final report in March upon completion of the project phase. The report will show under which circumstances the use of drones in site logistics can be economically and ecologically sustainable. Guidelines, possible additional use cases and operating concepts will be developed on that basis.

Prior to the launch of the project, Wingcopter, a startup, was already part of the  StartUp program of the House of Logistics and Mobility (HOLM) at Frankfurt Airport as well as part of the Accelerator program at the Merck Innovation Center The team was busy working at the time in the Innovation Center Maker Space on perfecting its vertical take-off and landing (VTOL) drone, using the facilities of the Rapid Prototyping Lab. In the course of continuous communication with in-house staff, the idea for the ProGeDa project emerged and was subsequently supported and encouraged by the Merck Accelerator and Innovation Center. The project is a good example of the diversity of collaborative ventures that startups can initiate in the Merck Accelerator program.

Find out more at: www.frankfurt-university.de/relut

About ﻿Frankfurt University of Applied Sciences (Frankfurt UAS): Frankfurt University of Applied Sciences excels as a center of applied science, global reach and diversity in action. Real-life questions receive science-based answers, and research results find their way into society right away. Frankfurt UAS is well connected in the global world of education and engages in partnerships with some 200 universities all over the world. Four faculties offer 72 study programs specializing in technology, economics, law and the social sciences. A wide range of work-and-study opportunities enables external students to  benefit from lifelong learning. Frankfurt UAS also conducts challenging inter- and transdisciplinary research in unusual combinations of specialist subjects. By pursuing dialogue with partners from business, professional organizations and institutions, Frankfurt UAS is an innovative development partner in generating cutting-edge solutions together. Close links between research and teaching with real-world practice gives students the qualifications and skills to join the working world. The campus of the university founded in 1971 as Fachhochschule Frankfurt am Main – University of Applied Sciences is located near the city center in  the heart of Frankfurt. Frankfurt UAS is also the largest university user of the House of Logistics and Mobility (HOLM) at Frankfurt Airport, initiated by the German federal state of Hesse.

About ﻿Merck: Merck, a leading science and technology company, operates across healthcare, life science and performance materials. Around 56,000 employees work to make a positive difference to millions of people’s lives every day by creating more joyful and sustainable ways to live. From advancing gene editing technologies and discovering unique ways to treat the most challenging diseases to enabling the intelligence of devices – the company is everywhere. In 2018, Merck generated sales of € 14.8 billion in 66 countries.

Scientific exploration and responsible entrepreneurship have been key to Merck’s technological and scientific advances. This is how Merck has thrived since its founding in 1668. The founding family remains the majority owner of the publicly listed company. Merck holds the global rights to the Merck name and brand. The only exceptions are the United States and Canada, where the business sectors of Merck operate as EMD Serono in healthcare, MilliporeSigma in life science, and EMD Performance Materials.

About Wingcopter: Wingcopter is an award-winning German manufacturer of innovative eVTOL drones, dedicated to improving the lives of people around the world. The startup from the German federal state of Hesse is currently concentrating on the delivery of medical goods as well as parcels (e-commerce/mail) and food.

With its unique, patented swing-rotor mechanism, the company is closing the market gap between commercial drones, helicopters and fixed-wing aircraft, thus achieving a new dimension of efficiency. The electrically powered Wingcopter drones take off and land vertically like multicopters in the smallest of spaces and fly long distances as efficiently and quickly as fixed-wing aircraft. This enables ranges of up to 120 kilometers and a Guinness Book world record speed of 240 kilometers per hour. Even in strong winds of up to 90 km/h or bad weather, the Wingcopter flies autonomously and reliably.

Wingcopter is, among others, winner of the International Prize of German Aviation (IDL), winner of the Hessian Founders' Prize and one of the winners of the Digital Logistics Award of the Fraunhofer Institute, record holder of the drone marathon "DroneMasters" as well as SDG's Spotlight Winner of the Japanese NTT Open Innovation Challenge 2020.

About the mFUND of the BMVI: As part of the mFUND research initiative, the German Federal Ministry of Transport and Digital Infrastructure (BMVI) has been funding research and development projects relating to data-based digital applications for mobility 4.0 since 2016. In addition to providing financial support, mFUND supports networking between members of the political, business and research community with various event formats, as well as providing access to the mCLOUD data portal. For more information please visit: www.mfund.de.